Following several days of force consolidation, reports from day twenty indicate a vigorous renewal of the Russian offensive in the south.

The Russians claim to have secured full control of Kherson, while also downing six Ukrainian Air Force jets, seven helicopters, and 13 UAVs in the last 24 hours. If true, this would be a remarkable haul of enemy air assets; the claim is yet to be substantiated by any footage. Day twenty also saw a Ukrainian airstrike on Russian helicopters based at Kherson.

Analysts estimate that between 4 and 15 helicopters were destroyed in the attack. A large convoy of vehicles was seen leaving Kherson on the same day. In addition, TB-2 drone footage allegedly shows the destruction of a Russian TOR M1 anti-aircraft system on the outskirts of Kherson, presumably in preparation for the airstrike.

Meanwhile in Mykolaiv, the HQ city of the Ukrainian Naval Infantry, Russian shelling continued. A fuel depot was hit during the bombardment.

Further south, a substantial grouping of Russian warships and landing ships was located by satellite imagery en route towards Odessa. Later in the day, a series of missile strikes hit the Ukrainian coastline, including near Mirnoye village. An amphibious landing in the region is unconfirmed, but may have taken place near Odessa.

Two Russian missile strikes around Dnipro caused significant damage to the airport, destroying its runway and terminal. Zaporizhzhia railway station was also targeted by a missile.

The Russians appear to be making progress towards Kryvri Rih on the west bank of the Dnieper. Nikopol was also hit by a Russian missile today, across the water from Enerhodar.

The mayor of Mariupol, Sergei Orlov, claims that Russian forces have taken 400 city residents as hostages in Mariupol Regional Intensive Care Hospital within the city. The report is unconfirmed, but has already been widely reported by western media.

The notorious Azov Battalion claims to have killed a Russian major general in the city during fighting on day twenty. No further details have been released as yet. Fighting in the city has been intense, with the defenders apparently cut off from resupply and surrounded on all sides. Footage from a Russian soldier shows soldiers and vehicles massing for an attack, reportedly in this location.

About 2,000 private vehicles reportedly left the city via a humanitarian safe zone to the west of the city, while a similar number waits to leave.

Footage shows yet more captured T-80 tanks in the Kharkiv region, repainted in Ukrainian colours. The T-80 is primarily operated by the 4th Guards Tank Regiment, which has suffered heavy casualties in the areas around Sumy throughout this campaign and lost dozens of tanks. Accounting for all variants, the Russians have lost 67 T-80 tanks so far, out of 228 total tank losses. 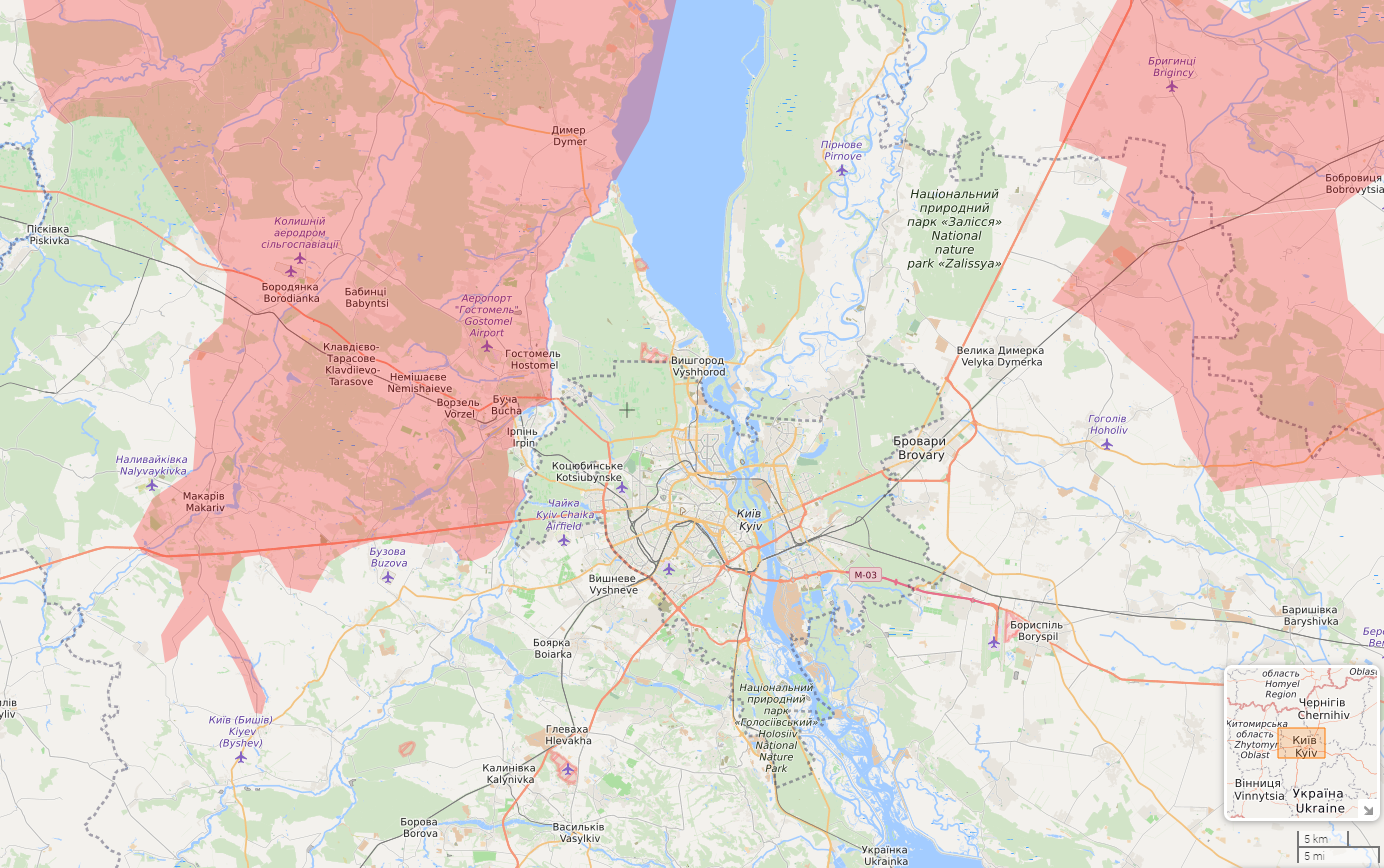 The Kiev authorities have imposed a 35-hour curfew, anticipating a major Russian offensive or saboteur infiltration on day twenty-one. Intense fighting took place during what appears to be a significant Russian offensive across a broad front to the west of the city. Fighting has continued in the woods near Kiev.

Fox News cameraman Pierre Zakrzewski and producer Oleksandra Kuvshynova have been killed near Horenka, Kiev Oblast, while war correspondent Benjamin Hall has been injured. Horenka is a district on the northwest outskirts of Kiev, next to Bucha and Irpin, which have seen heavy fighting and shelling over the past three weeks.